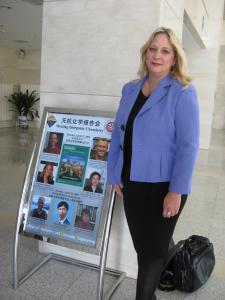 Renowned chemist and TAMU professor Kim Dunbar shares below scientists’ recent use of microspectroscopy to detect levels of microplastics in sea life.

Today, the threat of microplastics in the ocean proves to be a real problem as the bits of plastic are ingested by sea life, potentially harming them and the humans who eat them. Kim Dunbar explains that microplastics already permeate our oceans and have been discovered even in the sea’s deepest regions, such as in the Mariana Trench.

“Microplastics are found all over the world in sewage and wastewater runoff which spill into oceans and become ingested by local wildlife,” says Kim Dunbar. “Pacific oysters have been the focus of recent research into microplastic pollution because they are filter feeders and may have concentrated amounts in their systems. This is an immediate concern as Pacific oysters are a sustainable food source for many people today.”

The state of Washington is one of the biggest producers of aquaculture farms in the country and supplies Pacific oysters to countless individuals. Kim Renee Dunbar says that concerns over microplastic pollutants in these animals have led to postdoc studies from institutions like the School of Aquatic and Fishery Sciences into the severity of the problem.

“Students began to survey estuaries in Washington state parks and the oysters living there to gauge the impact of microplastics on local wildlife,” says Kim Dunbar. “Researchers before them claimed to discover a substantial amount of microplastics within oysters specifically, but the testing methods employed were inconsistent between their studies. Much of the work identifying the presence of microplastics was done by hand, for instance.”

To avoid varying results, testing by hand was eliminated in favor of a few specialized sampling tools using a molecular approach to identify microplastics. Scientists looked to infrared microspectroscopy first, which helped them gain a clearer picture of microplastic concentration.

Infrared microspectroscopy relies on the interaction of infrared radiation with matter and is used to identify and study chemical substances. While it did help the scientists pinpoint plastics more thoroughly, more techniques were eventually needed to obtain a full picture.

“The scientists looked to Raman microspectroscopy next, which is used to determine vibrational modes of molecules and obtain a ‘fingerprint’ for compounds,” says Kim Dunbar. “By combining both forms of microspectroscopy, they were able to boil down the actual number of microparticles analyzed to only 2% synthetic plastic. Many of the other materials being studied turned out to be shell fragments, salts, and other natural particles.”

Both forms of spectrometry are expensive and require extensive training to complete correctly. But through their work, scientists studying microplastics in Pacific oysters were able to discover a ‘fingerprint’ for future studies, determine the actual level of microplastic pollution in observed wildlife, and encourage the use of spectrometry as a more standardized tool for observation.