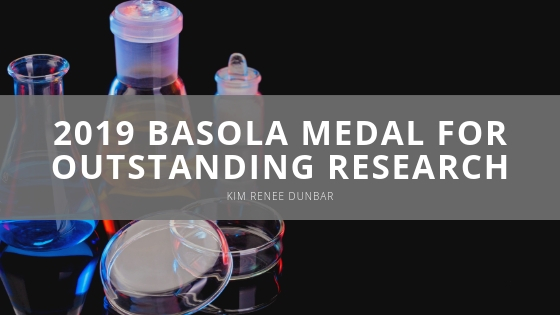 Kim Renee Dunbar was chosen as the winner of the prestigious 2019 Basola Medal for Outstanding Research in Inorganic Chemistry to celebrate her career achievements over the last three decades.

The award is presented each year by Northwestern University and co-sponsored by the American Chemical Society Chicago Section.

“I am deeply honored to receive this medal,” said Kim Renee Dunbar. She knew Fred Basolo, who the award is named for. “He and I had many long talks, and he regaled me with stories about the history of coordination chemistry,” Kim Renee Dunbar said. “He was a wonderful role model and an inspiration to me.”

Kim Renee Dunbar joined the Texas A&M Department of Chemistry faculty in 1999 and is the holder of the Davidson Chair in Science. She has received much recognition in her time in the department, including being named a University Distinguished Professor in 2007, and was the first female chair holder in the history of the college.

The research in synthetic and structural inorganic chemistry that Kim Renee Dunbar has conducted over the past twenty years in the Texas A&M Department of Chemistry has been funded by the National Science Foundation, Department of Energy, the ACS-Petroleum Research Fund and the Welsh Foundation among others.

This research is focused on the application of coordination chemistry principles to the solution of diverse problems in the field of Inorganic Chemistry. Kim Renee Dunbar’s research makes use of a wide range of tools, including spectroscopy, X-ray crystallography, electronic absorption spectroscopy,  magnetometry, electron microscopy, mass spectrometry, and electrochemistry.

“The list of previous recipients include many of my inorganic chemistry idols, mentors and friends,” said Kim Renee Dunbar. “It is a privilege to be recognized alongside so many inspiring leaders and innovators in the field of inorganic chemistry.”